We are proud to have played a key role in the renovation of the former Fitzgerald’s Casino & Hotel in downtown Reno to the Whitney Peak. The property is a non-smoking, non-gaming hotel that seeks to draw a recreation-minded clientele. Its fresh approach to downtown Reno includes a 164-foot climbing wall, 7,000-square-foot bouldering gym and a farm-to-table restaurant, along with a concert venue. Miles Construction served as construction manager at risk for an initial phase of remodeling. This included one model unit, 126 hotel rooms, the lobby, restaurant and concert venue.

Whitney Peak’s Chicago-based developers chose Miles after an intensive search of local and out-of-the-area contractors. The fast-track project involved working with an international team of designers and suppliers. Following the first phase, Miles worked on the room renovations, bringing the total number of renovated rooms to 340 and renovating the third floor conference level as a venue for weddings, meetings and banquets with space for up to 500 people. 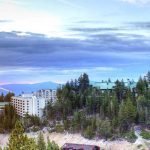