Comstock Railroad Museum is a state-owned history and research center, where the famed Virginia and Truckee Railroad’s 19th century operations focused. The idea of such a center had been discussed by state officials for several years and was approved by the 2003 Legislature in its capital improvement budget. The center houses a restored V&T engine, space for exhibits, research and storage for artifacts uncovered in Comstock excavations. It has a two-story building for exhibit and storage space and will house the Comstock Historic District Commission’s offices.

The building utilized both wood and structural steel as the primary construction methods. Concrete floors were used for durability and stained making them pleasing to look at. Clear wood paneling was used giving the structure an authentic feel appropriate to the old west. The roofing material is corrugated metal similar to the metal roofing used in the old west as well.  The doors the locomotive sits behind are replicas of the doors that were used on the former V&T shops in Carson City. 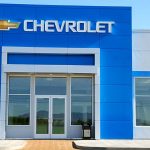 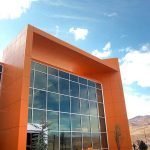