The structure is pre-cast concrete construction with a panelized roof system.  An existing fueling station, complete with its aging underground storage tanks, previously occupied the site.  Modifications to the off ramp were performed through tight coordination with the Nevada Division of Transportation. 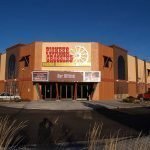